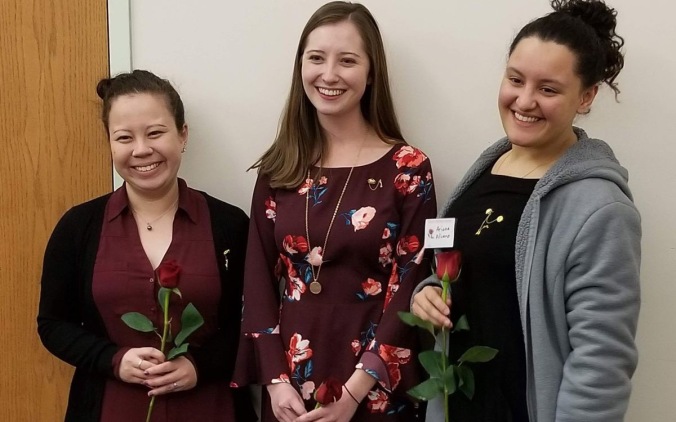 The Denver Alumnae Chapter was thrilled to affiliate three sisters at our meeting on Nov. 27, 2018!

Nicole Kobayashi was initiated into the Sigma Upsilon chapter at the University of Denver in 2014 where she held the office of Treasurer for a year and a half. While at the University of Denver, she studied clarinet with Dr. Jeremy Reynolds and graduated in 2016 with a BM in Music Performance. A few months prior to graduation, Nicole began working part time at a finance firm in Cherry Creek where she later accepted a full time position immediately following graduation. Since then, Nicole has been working in the financial services industry and is currently studying to obtain her Certified Financial Planner TM designation along with her Series 65 license. Nicole is from Honolulu, Hawaii and enjoys spending much of her free time outdoors in the Colorado wilderness.

Shelley McCluskey was initiated into the Epsilon Theta Chapter of Sigma Alpha Iota at Appalachian State University in April of 2013. There she held numerous committee chair positions, as well as served on the Executive Board for two years as corresponding secretary and president. Shelley completed her degree in music therapy in December of 2016. She is currently a Board Certified Music Therapist (MT-BC) with the Child and Family Therapy Center of Denver, where she provides in-home and clinic-based services for children and young adults with developmental disabilities, life-limiting illnesses, and rehabilitative needs. A North Carolina native, Shelley now happily resides in Denver with her boyfriend, Ben, who is a 2nd year law student at DU, and their wonderfully weird cat, Teddy. Hobbies include eating delicious meals she didn’t cook, quoting “Gilmore Girls”, and watching each snowfall with her nose pressed against the bedroom window as if she’s never seen the stuff before. Shelley hopes to enroll at CSU to begin graduate coursework in music therapy next fall.

Ariana Olivero graduated from Florida International University in May 2018 with a Bachelor in Communication Arts and a minor in Global Media Communication. She initiated in Fall of 2017, and was part of the Fraternity Education/Ritual committee and Public Relations committee for the Lambda Omicron Chapter. An accomplishment she’s proud of while being in her chapter was being able to rebuild the entire website from scratch. Ariana is a mezzo-soprano vocalist. Her hobbies include DIY projects, exploring Denver, and writing in her bullet journal. Ariana was always involved in the arts from a young age through dancing, playing guitar/piano, singing, and even painting. Although she doesn’t paint or play instruments anymore, that is something she hopes to do again in the future. She loves SAI because it allows her the opportunity to connect with women from all walks of life that share the same love of music she has. Ariana recently moved to Denver to be an AmeriCorps member with City Year where she dedicated a year towards decreasing the amount of graduation dropouts. She also founded the first ever cheerleading team at her school in the 92 years it’s been open.

Site managed by the Technology Committee. Contact us at saidenveralum@gmail.com
Last update: Aug. 6, 2022